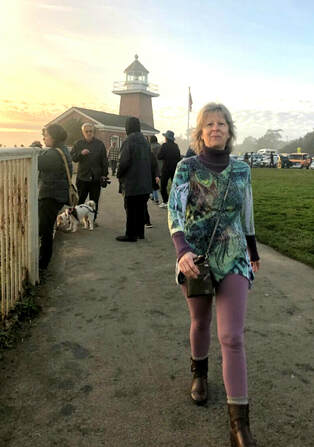 Screenwriting in the Boonies was conceived of in 2008 by C.G. after reading so many books and blogs that said, "If ya wanna be a screenwriter, ya gotta move to L.A."
C.G. decided she would be proud of her position out in the boonies and just get on with it. She believes that the writing (and developing as a screenwriter) is more important initially than following the rules.
Of course, a lot has changed since 2008. There are now more options for aspiring screenwriters who do not live in Los Angeles.
C.G. is a creative writing coach and full-time house sitter. She mainly takes house-sitting gigs in the Southwest and California. At the time of writing this page, she's house sitting near Santa Cruz and working on two screenplays—one for her own personal exploration and one that she'd eventually love to put in front of actor/producer Renée Zellweger.
C.G. has previously completed three screenplays and has a half dozen treatments lying around as well. She vividly remembers reading on the Wordplay blog that the co-writers of Shrek wrote 10 scripts before they tried to sell one to Hollywood. She took this to heart . . . but may not write as many as 10 before diving in.
Powered by